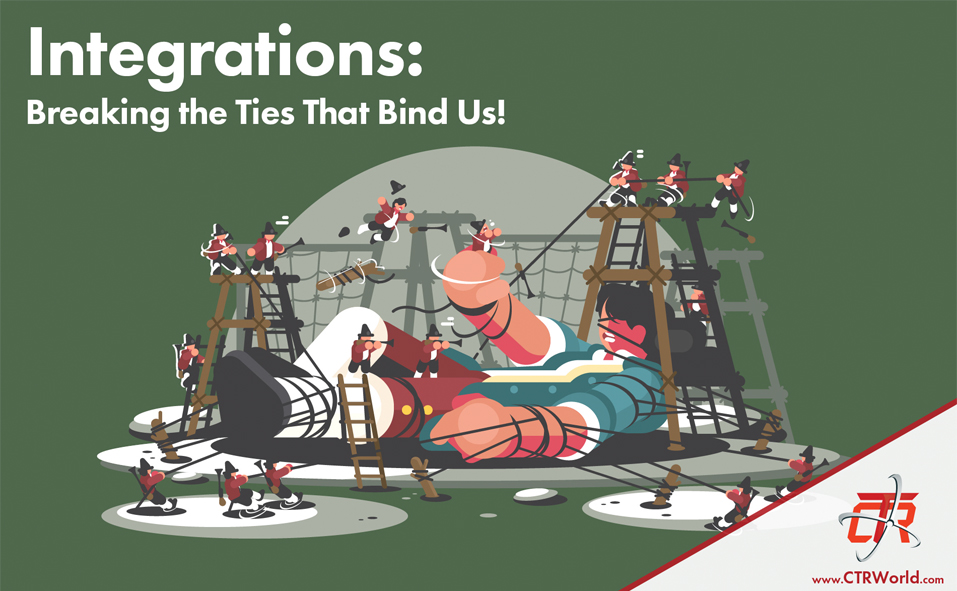 Over the course of the next few weeks, we’ll be taking a deep dive into one of the most important, but often overlooked, aspects of cloud operations: Integrations. Before we discuss how integrations are done and why your company should consider them, we first have to explain exactly what they are!

Simply put, an Integration is when all of your data becomes consistent and auto-populated across multiple software systems. This means that the data you see in one application is exactly the same in another.

In the early 2000s, it was believed that, by this time, there would only be a handful of large Enterprise Resource Planning (ERP) products being used by the majority of companies. As a result, there was no need for any type of integration tools because it was assumed that each of these ERPs would have end-to-end processes built right into the product. Process flows like “Procure to Pay” and “Order to Cash” would be done in a single program. Sure, there would always be data extraction tools that would feed information from one application to another, but that would be monitored by highly-skilled IT technicians.

What happened over the next decade, however, was the complete opposite of what was expected. Numerous industry and function specific software burst onto the scene and it became the norm for companies to use a half a dozen or so ERPs in their day-to-day operations.

With such a diverse selection of ERPs to choose from, the issue of Data Integration became larger and more critical by the day. Data needed to be shared across multiple platforms and companies found themselves spending huge amounts of time re-entering that data into their many applications.

For example: A company might enter their supplier’s information into a sourcing software, like Coupa, for quoting and qualifying purposes. When that quote turned into an accepted bid, they would then need to create a purchase order in Oracle Cloud ERP. After a while, they would receive the product from the supplier in Coupa and have to manually update it in Oracle to match their payables. Finally, they might have been using a different software to handle their payments, like Apptivo, to finish the transaction.

In other words, a company would have to use 3 different programs for one transaction and, worse, they would have to re-enter new data separately into each of those programs. That’s a lot of time spent on one task when it could have been used on generating more sales and increasing revenue.

With an Integration Platform as a Service (iPaaS) tool, however, data re-entry is automated and self-populated across multiple ERPs or other applications. Tools like Dell Boomi, MuleSoft, and Oracle Integration Cloud empower companies with the ability to implement integration projects involving any combination of cloud and on-premises software. A good iPaaS solution provides efficient and nimble integration development, API management, and a wide variety of pre-built connectors to satisfy almost all integration needs.

When considering an iPaaS tool, it should include the following:

At CTR, we maximize your company’s interconnectivity by making the exchange of information between applications possible. If you’re ready to tackle enterprise data integration head-on, we invite you to learn more about integration and iPaaS by contacting us at CTRWorld or by visiting us at Enterprise Application Integration.